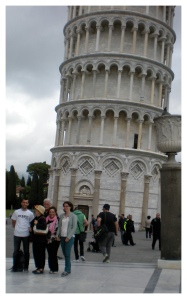 It doesn’t matter how many tourists visit it and how much of a cliche it may be, the leaning tower of Pisa is still a stunning building. After a week with the sombre palette of the Tuscan hill towns, it was easy to see why they named this transcendent, shining white place the Piazza dei Miracoli. 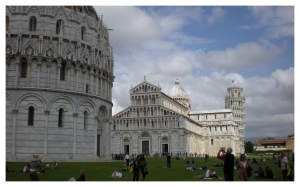 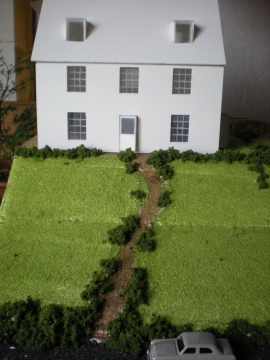 Last month I did some architectural model making and this was the result. It’s a scaled down model of a 2008 design for a 3 storey house.

As I worked I started to associate the model with the house we lived in when I was 5.  We once lived in a 3 storey house in a village called Stockbury in Kent; number 5 of 10 childhood homes. It was an Army hireing ( a private house the Army rented to house families that were waiting for accommodation on a nearby barracks) on the top of a hill. It was very large and only heated by a range and coal fires so we lived in the rooms on the ground floor. I remembered waiting at the window each night that winter and spring for the lights of Dad’s car to appear and then seeing him get out and climb the steps to the top.

I enjoyed making the hill, maybe even more than making the house itself and when I put the car in place I felt quite strange. Nothing is historically accurate, the house was pink not white, the bay window was at the front not the side, the conservatory was a greenhouse and the Ford Consul was blue and white. But that doesn’t really seem to matter 🙂

We watched this wonderful “ant” photo shoot performance from the cafe deck of the Yorkshire Sculpture Park. It wasn’t arranged for our benefit but that made it even better. 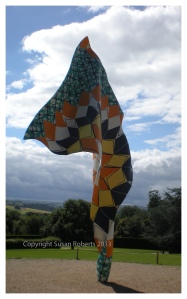 Yinka Shonibare MBE was born in London, grew up in Nigeria and came back to the UK to study. His latest show Fabric-ation includes sculpture, film, photography and painting. He uses his signature Dutch wax print African style textiles to challenge colonial and cultural stereotypes in a series of historical contexts from the 18th to the 21st century.

“The idea that there is a some kind of dichotomy between Africa and Europe, between the exotic other and the civilised European, if you like – I think is completely simplistic.

So I am interested in exploring the mythology of those so called separate spheres and in creating an overlap of complexities.” Yinka Shonibare